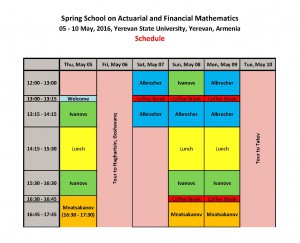 Abstract: In this short course, we will deal with reinsurance in its various forms. This involves discussing theoretical properties of this form of risk sharing and optimality results of contracts, as well as practical issues in their pricing. We will also touch upon statistical challenges in this context. Illustrations with real data sets will be given.

Abstract: The classical compound Poisson risk model will be introduced and the questions about approximations as well as estimations of the ultimate and finite-time ruin probabilities will be discussed. Different approximations based on the scaled Laplace transform inversion, the maximum entropy, and De Vylder’s methods will be outlined. The performances of the asymptotic behavior of introduced estimates are illustrated by means of simulation study. Approximation of a distribution function of the ruin time, the Value at Risk, and the inverse ruin probability in the risk models with different compound distributions will be discussed as well.

Abstract: Lévy processes are stochastic processes with stationary and independent increments. They form a rather rich class of models for which a comprehensive mathematical theory exists. This class includes a Brownian motion and a compound Poisson process which lie at the heart of financial mathematics (Black-Scholes model) and collective risk theory (Cramér-Lundberg model). In this introductory course we will discuss characterization and properties of Lévy processes, fluctuation of their paths, and some of the available simulation methods. Particular attention will be given to questions arising in actuarial and financial mathematics.

Prerequisites: only some basic notions from probability theory.